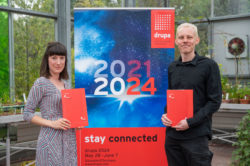 This year’s presentation of the drupa Prize gave double reason to rejoice: art historian Nina Goldt was recognised for her dissertation “Portrait à la mode. Das weibliche Figurenbild der École de Paris im Spiegel seiner Entstehungszeit” (The Female Figure Image of the École de Paris in the Mirror of its Period of Origin”) with the drupa Prize 2021. At the same time, philosopher Dr. René Baston received the drupa Prize 2020 for his dissertation “Implizite Vorurteile – eine philosophische Betrachtung” (Implicit Prejudices – a Philosophical Consideration”. The presentation had to be postponed due to the pandemic but could now go ahead. The award that comes with prize money of EUR 6,000 was presented by Wolfram N. Diener (President & CEO of Messe Düsseldorf) and Prof. Dr. Anja Steinbeck (President of the Heinrich-Heine-University Düsseldorf) at a formal ceremony on 17 August 2021 in the Orangery of the Botanical Garden of Heinrich Heine University Düsseldorf.

In her dissertation Nina Goldt deals with the female figure image in the first third of the 20th century in Paris as the artistic centre of modern times. The Faculty Council of the Faculty of Humanities at Heinrich Heine University justifies her nomination for the drupa Prize saying that Goldt manages to present the changes in modernity as a visible indicator of the altered position of women in society in a highly vivid manner. Her work not only makes a substantial contribution to the gender discourse in modernity, but also provides new genre-specific insights into portrait research.

Dr René Baston’s dissertation provides a fascinating overview of the debate on implicit prejudice. He shows that discriminatory behaviour often happens unconsciously and makes this point with impressive examples. For instance, while the US has seen a significant decline in explicit racist beliefs, people of colour continue to be discriminated against in some areas. This implicit racism is explained in social psychology by implicit prejudice. Dr Baston’s work brings together findings from social psychology and philosophy. His convincing results have already found their way into the scientific discourse through publications in journals.

About the 2021 drupa Prize Winner

Nina Goldt was born in Walsrode in 1986. After graduating from high school, she studied art history and Romance languages at the Faculty of Philosophy of Heinrich Heine University in Düsseldorf. In 2012, she completed her studies with a Master of Arts in Art History. From 2013 to 2019, she devoted herself to her doctoral project “Portrait à la mode. Das weibliche Figurbild der École de Paris im Spiegel seiner Entstehungszeit” at the Institute of Art History at Heinrich Heine University Düsseldorf. Her dissertation was assessed summa cum laude. Since 2014, she has been a freelance technical translator (French and English) and editor for Dumont Buchverlag, Edition Michael Fischer and Arnoldsche Art Publishers, among others. Nina Goldt lives in Düsseldorf, is married and has a daughter.

About the 2020 drupa Prize Winner

About the drupa Prize

Ever since 1978 Messe Düsseldorf has awarded the drupa Prize, which comes with Euro 6,000 prize money, for an outstanding thesis written at the Faculty of Philosophy of Heinrich Heine University in Düsseldorf. The prize money is used for the publication and dissemination of the award-winning work in the humanities. The drupa Prize is awarded by a panel of experts comprising the Rectorate and Vice Rectorate of Heinrich Heine University (HHU) Düsseldorf, the Chairman of the drupa Committee and the CEO of Messe Düsseldorf.

More information on www.drupa.com and on our Social Networks: