Attaching a Different Importance to Things 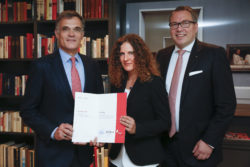 For her doctoral thesis on “Maschinengeschichten und Prozesswelten. Interferenzmuster des Ontomedialen zwischen Technowissenschaften und Prozessphilosophien” (Machine Stories and Process Worlds. OntoMedia Interference Patterns between Techno Sciences and Process Philosophies) Dr. Lisa Handel (33) was awarded the drupa Prize 2018. In her doctoral thesis written at the Faculty of Philosophy at Heinrich-Heine University in Düsseldorf the cultural and media scientist calls for a new thinking in view of the increasing computerisation and digitisation of all areas of life.

Claus Bolza-Schünemann started his laudatory speech for this year’s prize winner, the 33-year old cultural and media scientist Lisa Handel, by saying that several highly interesting doctoral theses had been submitted to the drupa Prize committee again. The Prize committee comprises of the Rector and Vice-Rector of the Heinrich-Heine University Düsseldorf, the Chairman of the drupa committee and the CEO & President of Messe Düsseldorf. Nominated for the drupa Prize 2018 were five of the doctoral theses successfully completed and defended in the Faculty of Philosophy at Heinrich-Heine University Düsseldorf in 2016 and 2017. The doctoral theses covered subjects ranging from Romance and German language studies through cultural and media science to art history and general philology.

Experts say that the doctoral thesis “Maschinengeschichten und Prozesswelten – Interferenzmuster des Ontomedialen zwischen Technowissenschaften und Prozessphilosophien” awarded with the drupa Prize 2018 is an “extraordinarily complex and innovative study in which current developments in the omnipresence of computerisation are discussed from a media-philosophical perspective.“ In her study the prize winner Lisa Handel “picks up on the process philosophy insights and assumptions of renowned and important philosophers such as Henri Bergson, Alfred North Whitehead and Gilles Deleuze and links them with the theories and practices of techno sciences including digital science and quantum physics.” With her doctoral thesis the prize winner has not only made “an impressive contribution to linking ‘science and humanities’” says university professor Dr. Ulrich Rosar to explain the nomination of Lisa Handel. At the same time, the cultural and media scientist “provides significant mental figures for gaining a wider understanding of the pressing problem of ecology as a relationship between relations.”

According to Claus Bolza-Schünemann, in her prize-winning doctoral thesis Lisa Handel shows that changes do not just simply occur along the lines of “one day like this, the next like that” but constantly take the shape of processes in all areas of life. Using letterpress printing, the steam engine and telephone as examples, whose development and societal impact Claus Bolza-Schünemann summarises in his laudatory speech, the drupa president reveals the intention of the prize-winning doctoral thesis: that the materials and technologies used are not only means to an end but also inherently impact events. Lisa Handel also emphasises in her thesis that humans are not passive observers of the processes, but that “we actively help shape them through our actions”. Seen from this perspective, current events such as the refugee and financial crises, real estate bubbles, environmental disasters and also climate change are – according to Lisa Handel – interim results of processes we have considerably influenced rather than suddenly occurring events.

The publishing house Transcript has included the 2018 drupa Prize-winning doctoral thesis in its portfolio under the title “Ontomedialität: Eine medienphilosophische Perspektive auf die aktuelle Neuverhandlung der Ontologie”. The 400-page volume is scheduled for release in 2018 (ISBN 3837640590, 9783837640595).

About the Prize Winner

Dr. Lisa Handel was born in Duisburg on 18 January 1985. After obtaining her school-leaving certificate she studied cultural and media sciences in the Faculty of Philosophy at Heinrich-Heine University Düsseldorf. She completed her studies in 2009 (Master of Arts, M.A.). In 2010 she started her doctoral thesis on “Maschinengeschichten und Prozesswelten. Interferenzmuster des Ontomedialen zwischen Technowissenschaften und Prozessphilosophien”. December 2016 saw her successfully defend her doctoral thesis with the top mark summa cum laude. Dr. Lisa Handel worked as a scientific assistant at the Institute for Cultural and Media Sciences at Heinrich-Heine University Düsseldorf during her doctoral studies. At present, Lisa Handel works as a scientific assistant at the Centre for Gender Studies Cologne (GeStiK) at Cologne University.

About the drupa Prize

Every year, Messe Düsseldorf presents the drupa Prize to the best doctoral thesis at the Philosophical Faculty of HHU. Since 1978, it has honoured outstanding work in the humanities produced at Düsseldorf University promoting their publication and dissemination with prize money of EUR 6,000. The drupa Prize is awarded each year by an expert panel composed of the President and Vice-President of Heinrich Heine University Düsseldorf, the Chairman of the drupa committee and the President & CEO of Messe Düsseldorf.

We would appreciate a sample copy of any reprints.